Around the World with MAGIC!

It all started with an unexpected telephone call from a fellow I had never met, but who had booked me as an entertainer multiple times across the USA.  The dates had been small, personal appearances at private parties or comedy clubs.  I went around Wisconsin for him and out to both Wyoming (multiple times!) and California.  But, this call was for something different. 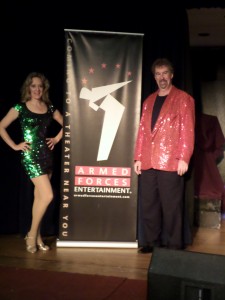 My caller was assembling a tour for US military bases in Asia and he wanted a magician, a mentalist (mind reader) and a comedian.  I was his magic choice.

I suggested a Chicago performer friend to be his mentalist and I recruited one  of my “Seebabes” to go along to be levitated.  But, this assistant could also sing so she added an extra dimension to the program.  The comic had already been selected and he turned out to be a clever and witty fellow I had shared the stage with at Hollywood’s Magic Castle back in the 80s.  Our little troupe was ready to embark on a whirlwind adventure!

We flew Chicago – Hong Kong – Singapore – Diego Garcia – Bahrain – London – Chicago… and all in eleven days!  We managed to squeeze in five performances for our military personnel stationed in Asia and we, of course, had new adventures every day.

While the upper midwest was experiencing record cold and snow we were where it was “jungle hot.”  Our first show, outdoors in Singapore, was at the frighteningly named “Terror Club.”  By evening it was balmy and the audience was enthusiastic and friendly although the venue did not have much stage lighting for a show that occurred after dark.  We explored a tiny bit of this cosmopolitan city.  Our hotel was on their modern River Walk with outdoor cafes` offering $12 bottles of beer and a serving of french fries for $10!

Prices were much cheaper in their large Chinatown which was just a short walk across the river.  Our open air lunch was enjoyed in the hustle and bustle of this extensive crowded market.

Then it was on to Diego Garcia for two shows at two different venues.  This island is just a speck in the Indian Ocean.  It’s a British territory, but the US has a bigger presence than the Brits do now.  Strict rules prohibit tourists or travelers from visiting Diego Garcia.  The only aircraft permitted to land are military flights.  We found the serviceman and women to be very welcoming and the largely-Filipino support workers on the base were exceptionally warm.  We were taken to Turtle Cove (where the crabs outnumbered the turtles) and out to an eleven-story-tall military supply ship that could feed and outfit thousands of soldiers for weeks in a crisis… all ready-to-go 24/7.  Wild burros and some leisurely bike riding were enjoyed by our cast, but we missed our chance for an ocean swim as sharks had been spotted very close to shore and bathing was forbidden. 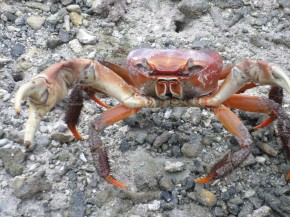 From the humble dishwasher to the base commander who invited us into his office for a chat, we were treated like visiting royalty.  And, we all thought we should be thanking them for their service.

A night-time military flight took us to another city/state, Bahrain.  Security was tight everywhere and we felt like we were in some action/thriller movie as we were repeatedly asked for our “papers” and our “orders.”  Our cargo was examined and the case I had with fourteen daggers used in an illusion with my assistant drew close scrutiny.

The terrain was desert-like.  Our hosts took us to a place where we could see the Prince’s camels that he raises as a hobby.  He has 600 of them.  And, we visited a bazaar with —yes— carpets, furniture, live animals (!) and a sort of swap meet/flea market feel.  We wandered a grocery store with all sorts of offerings not likely to be easily found in the US.   The friendly employee at the deli counter patiently introduced us to the exotic offerings and let us sample anything we wanted.  We settled on some choices, picked some fresh fruit and dried offerings (dates) and then local beverages.  We ate al fresco while watching all the bazaar’s activities.

An unusual highlight was being taken by a very friendly and generous couple out to dinner after our first Bahrain performance.  The husband navigated the city’s narrow and confusing streets, driving the wrong way down one that resembled an American alley, to bring us to a secluded Mexican restaurant.  It was dark, upscale and busy, even though it was now quite late.  The diners were being entertained by a one-man-band, a Filipino singing American country-and-western tunes!  What a culture clash!  The food —and drink— were excellent and my lovely assistant and our mentalist both got up to join the musician to sing for everyone.

An unusual highlight was being taken by a very friendly and generous couple out to dinner after our first Bahrain performance.  The husband navigated the city’s narrow and confusing streets, driving the wrong way down one that resembled an American alley, to bring us to a secluded Mexican restaurant.  It was dark, upscale and busy, even though it was now quite late.  The diners were being entertained by a one-man-band, a Filipino singing American country-and-western tunes!  What a culture clash!  The food —and drink— were excellent and my lovely assistant and our mentalist both got up to join the musician to sing for everyone.

But our evening was not over.  The couple then drove us all to a hookah lounge where we ordered blends with various spices (rose, mint, etc).  The hookah hose was passed around and stories were exchanged by people who will likely never see each other again.

The following day we were taken to a patriot missile base that was far removed from the city center.  Our group was full of questions, but some answers —like magicians’ secrets— were “classified” and we had to accept not knowing.  The personnel at the base would be on duty during our show and so it was arranged that we would have lunch with them in their very basic cafeteria that wasn’t much more than a big tent.  Once again we were struck by how happy these folks were to have company and talk of home.  The food was basic; the experience was not.

Our second Bahrain show was at their air base.  I recall that the building where we performed had no bathroom facilities.  I had to walk to a trailer some distance away that served as a comfort station.  The wind was very strong and the desert sand 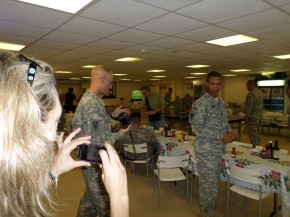 Lunch on base in Asia

was swirling as I tried to find my way in the dark.

From Bahrain we flew overnight to London’s Heathrow where I had enough time for a traditional English breakfast before the flight that would bring me back to the USA.

My eleven days certainly qualified as a “once-in-a-lifetime” experience, but I hope not.  There’s talk of another m,ilitary tour… 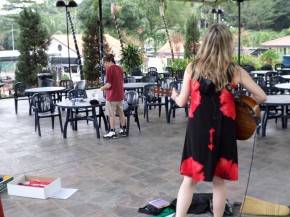 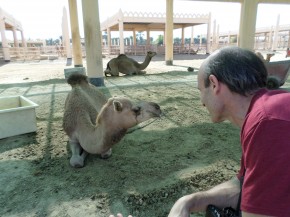 Comedian Marty and one of the Prince’s camels