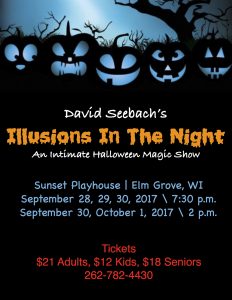 Since 1991 David Seebach has presented a unique theatrical presentation combining magic, mystery, spooky tales, audience participation, plenty of humor and his famous grand stage illusions in a Halloween-themed production.  For 2017 the show will appear at Elm Grove’s (WI) venerable Sunset Playhouse, a theater that Seebach first appeared at in 1969!

This year’s show will be a departure from previous editions.  Imagine being invited into the illusionist’s parlor for an intimate afternoon (or evening) of wizardry.  Spectators will sit comfortably at tables and have refreshments at hand to steel their nerves (if necessary).  But, only eighty-eight lucky folks will be admitted to Sunset’s studio theater for each of the five performances.

The show begins with a ‘tour’ of a miniature haunted house and, like all good haunted houses, it’s full of surprises.

A little later, with his lovely assistant, Anne, the magician will present a modern electrical nightmare with eighteen hundred watts of lethal AC power. 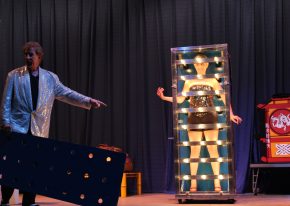 Do you remember playing Clue, trying to solve the mystery of Mr Boddy’s murder?  Seebach will re-create the popular board game with six audience members as the well-known suspects and there will be lots of fun figuring out whodunnit!

Magic’s most enduring illusion will make an appearance, too.  Everyone knows all about it and yet it is not often performed anymore in the classical fashion.  Seeing it live beats any version that shows up on television. 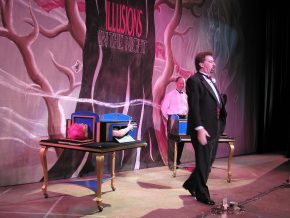 What would Halloween be without a witch and a carved jack o’lantern?  The conjurer has his own ‘take’ on these October icons.  It’s a fast-paced mystery with a surprise finish! 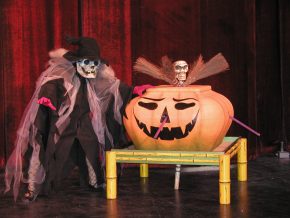 And, there’s still more!  One jaw-dropping card trick, humorous antics with audience youngsters invited to help, plus a favorite tale of Seebach’s about a long-deceased school teacher and her remarkable supernatural ability you’ll never forget.

Let’s not forget that Halloween is also National Magic Day, commemorating the death of Harry Houdini on October 31, 1926.  The cast will reproduce a legendary act of The Great Houdinis.