Halloween “Illusions in the Night” 2013

As we all transition from Summer to Autumn, the subject of Halloween comes up and this, of course, has been a BIG part of my calendar since 1991 when we created “Illusions in the Night” at Milwaukee’s historic Modjeska Theater.  The show had a nineteen year run at the Modjeska until the theater’s new owners could not maintain the aging showhouse.  On our last year there it rained heavily on opening night.  Sadly, it was raining outside and inside the building with water streaming down over backstage electrical panels and pooling in the basement dressing rooms.  We had to find a new venue.  With great luck we re-located to Greenfield, Wisconsin’s Performing Arts Center.  Now we had an ultra-modern facility with state-of-the-art sound and lights and dry dressing rooms.  What we ‘lost,’ however, was the decaying, rotting haunted house ambience of the Modjeska.

The only constant in life is change and so we are moving again in 2013 and changing the show completely.  It will still be a Halloween-themed attraction and it will feature a number of the grand stage illusions.  But, instead of a theater production we are going to make it more of a cabaret entertainment.  That means more close-up seating and more interactive audience participation.

My friend, Jimmy “The Big Bopper” Prince, is helping produce this year’s edition.  We are going to take it to Green Bay on Friday, October 18th and then present three Milwaukee performances on Friday and Saturday, October 25th and 26th.  There are evening shows each night and a special matinee, too, on Saturday.  There are general admission prices and preferred, table seating premium seats with several neat ‘perks.’

“Are you a good witch or a bad witch?” Magically, she’s BOTH!

Yes, there will be a levitation act.

Yes, the famous guillotine act will be included.

Yes, there will be “spooky stories.”

I certainly hope you will join us for this new version of our popular Halloween tradition.  And, of course, you’re invited to come in costume! 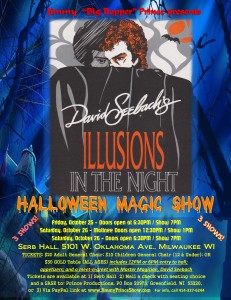